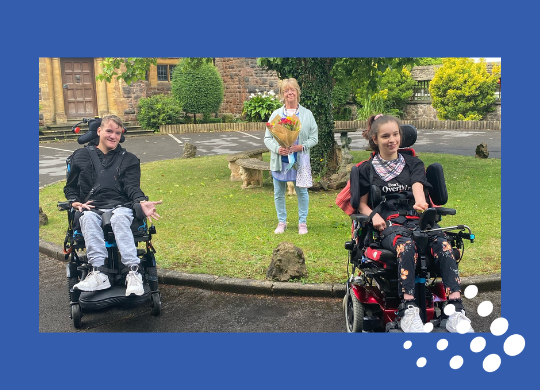 Angela Gardner is a housekeeper/laundry assistant at our children’s residential home in Cardiff, which cares for and supports people aged up to 19-years-old with dysphagia, epilepsy, mental health needs, cerebral palsy, autism, and learning difficulties.

Angela started at the home in 1977 as a kitchen assistant and during the years also worked directly at nearby Craig y Parc School. She worked there for ten years in the kitchen and as a cleaner.

Colleagues and individuals supported by the home took the time to celebrate her long service with a presentation.

Career highlights for Angela include being nominated for and winning a hospitality and a loyalty award, staying for two nights in a beautiful hotel for the awards ceremony, making friends for life and being involved in events such as garden parties.

John Godden MBE, CEO of Salutem Care and Education, said: “Angela is a much-loved and committed member of staff as is reflected by her winning two company awards.

“She is such an integral part of the team, and we are incredibly indebted to her for her dedication as our service users rely on the skills and compassion of professionals like Angela.

“Her positive attitude, energy and enthusiasm are an inspiration to others. She deserves to be congratulated on her remarkable long service achievement.”

Angela, a 66-year-old grandmother, said: “I am really proud to have reached this 45-year milestone in my career.

“Working in the care sector can be challenging, but at the same time extremely rewarding.

“The sense of satisfaction you get from working in a job that makes a difference to people’s lives in second-to-none.”

Outside of work, Angela, who is married with a son and a daughter and four grandchildren, likes to spend time with her family, socialise with friends, watch films, garden and walk her dogs.