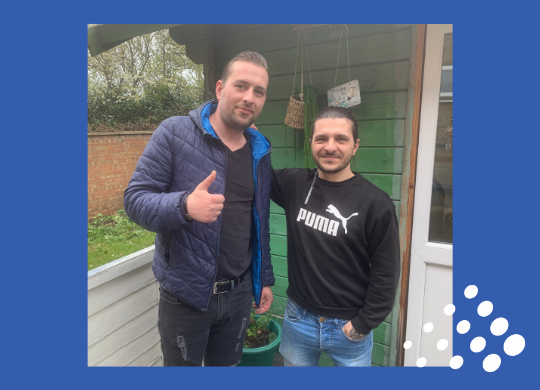 Andrei Baltag-Demetriade and Tiberius Michituc, two Romanian care workers based at Azalea House in Bedford, are sharing their stories by way of support to Ukrainian refugees who are seeking employment once they arrive in the UK.

Andrei and Tiberius arrived in the UK in 2017, speaking relatively little English, but have demonstrated that this need not stand in the way of a successful career in care.

Through their work and time at Azalea House, they have become fluent speakers and can confidently help the people they support and their families.

Andrei has now achieved his Level 3 apprenticeship as a lead adult care worker and Tiberius is working towards his Level 2 in Health and Social Care.

The pair hope that their story will inspire Ukrainian refugees making their home in the UK to consider a career in care to bring normality back to their lives.

Andrei said: “Before I came to the UK, I had experience in care with my family. My dad died young, and I was called on to care for my uncle who had schizophrenia. This was excellent training for working with people with special mental health needs.

“I know a lot of people coming from Ukraine will also have transferable skills, such as nursing, and they might be frightened to apply if their English isn’t very good. I say, if you think you’ll be a good carer, go for it. You will be helped and supported and the language will come.”

Tiberius said: “It can be really difficult to start a new life far away from home, especially under the circumstances that the Ukrainian refugees are coming here. Working at Azalea House has been like joining a family – really supportive and encouraging.”

Donna-Maria Masters, manager at Azalea House, said: “We’re so proud of everything Andrei and Tiberius have achieved in such a short space of time.

“Salutem Care and Education, which operates Azalea House, has offered financial support to help them both with their studies, but it is Andrei and Tiberius hard work that has really made them successful.

“We’re all following what’s happening in Ukraine, and we want to do whatever we can to help. It would be fantastic if we can find positions for talented people coming into the UK.”

Azalea House is operated by Pathways Care, which is part of Salutem Care and Education. It is rated Good by the CQC.